Bluegrass Orthopaedics' would like to acknowledge Mr. Robert Quinn as our latest Comeback Champion. Mr. Quinn has been through quite the journey over the last year, with unforeseen delays that pushed off his knee replacement until this past summer.

"The initial procedure for my knees were Euflexxa© and Orthovisc© shots, which worked well for a period of 6+ years. I was never pushed into knee surgery, as Dr. Balthrop stated it was my decision based on timing. Finally, in 2016, I decided it was time for my knee replacement, and we planned a partial knee replacement." As with most procedures of this nature, each patient requires a cardiology clearance - and unfortunately Mr. Quinn's report was not positive. "Long story short, my cardiologist told me I had AFib (Atrial Fibrillation), and would need to address this prior to surgery."

Six months later, Mr. Quinn got the "okay" from his cardiologist to proceed with his knee replacement, but little did he know, there were more health issues to come. "During a trip to Brussels that year, I contracted MRSA on my foot, which lead to 6 weeks of double antibiotics and my foot in a boot. Once I was clear from that, I still needed to wait a little longer. BGO advised me that the infection needed to be clear for at least another 4 months."

Mr. Quinn went back to work, with trips to China and Seoul, but contracted a blister during that time… along with a staph infection. "My foot doctor wanted to perform surgery to fix my toe, but after another issue with my heart, I also needed a Pacemaker. Finally, with the infections gone, my heart with a Pacemaker, I knocked on Dr. Balthrop's door again. We scheduled my knee replacement surgery for August 12th, 2019 - but due to the time that passed, the partial knee replacement would end up being a total knee replacement."

"Shortly after surgery, I began working with Lee and the team at BGO PT. I was aggressive the first week, setting up a regimen of 3 visits per week, but had to back down and get checked out for a possible blood clot. Thankfully, no blood clot was found, and I was able to continue PT shortly after. I believe clearing my head of all the pain meds was key, and with encouragement from the team at BGO, I was able to move from 90° knee flexion to 120°."

"It was the team at BGO, including Lee, Bethany, Brian, and PJ, who coached me step by step to get through PT. Everyone at BGO PT was very helpful, respectful, and treated me very well. My wife Erna came to every PT appointment with me. She learned how I was to do things right, and advised Lee when I wasn't working hard enough! She is the real champion in this process!"

"Upon finishing the formal program, I have continued with the BGO Gym Program and have been going 2 days a week. It's nice to be able to walk and not have pain in my knee! My grand-daughters notice I can walk straight again! I am very thankful I met the team at BGO, from the reception team to the PT team members. They are very professional, and BGO should be proud of each of the members at the BGO PT Center."

Mr. Quinn - we are thrilled that you have come through the other side of this and have done so well. We know it was not the best journey to take, but we are blessed to have worked with you through this. You (and your wife!) are true Champions! 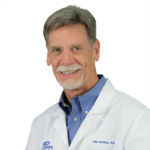